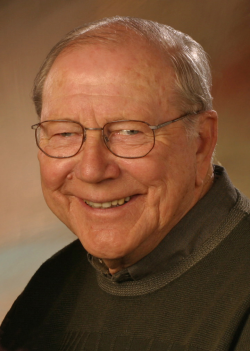 He was a loving son to the late Zoël and Eva (Cormier) Belliveau, husband (63 years), father, grandfather, great-grandfather, brother-in-law, cousin, nephew, uncle and friend to so many beautiful people whose lives were graciously touched and blessed by his very tender essence.

Ulysse "Joe" was a graduate from Collège St-Joseph and later took specialized courses complimenting his career in Finances with the University of Toronto, the University of Antigonish and the Université de Moncton. He also received various accreditations and certifications through La Fédération des Caisses Populaires Acadiennes.

From 1951 to 1968, he worked within the Retail Industry in Toronto, Halifax and Moncton, most notably Tip Top Tailors Ltd. From 1968 to 1992, he had a very successful and fulfilling career as General Manager with La Caisse Populaire L’Assomption Ltée., and from 1992 to 1995, he worked for the Referendum, Federal and Provincial Elections.

He actively volunteered with numerous organizations and held seats on various committees: La Fédération des Caisses Populaires Acadiennes, President of the Moncton and the Atlantic Chapters for Scouts Canada, and Founding-President for the Beaumont Camp, Vice-President for Le Matin newspaper; Treasurer for Les anciens et anciennes ami(e)s de l’Université de Moncton, Commissionaire with Greater Moncton Town Planning, Chamber of Commerce, and Knights of Columbus to name only a few.

He was actively part of the Beausejour Curling Club, Press Club, Pine Needles Golf & Country Club, Golden Age Club, Wine Club, Bowling, and he thoroughly enjoyed the social and competitive aspect of his favorite card game - Bridge. He had a very high regard for his Bridge co-conspirators and partners. He was very social and truly enjoyed solving all the world’s problems with "the boys" over a Tim Horton’s coffee.

Many important personal alliances and lifelong friendships emerged over the years. He was noted as a mentor by friends and colleagues and was a well-respected member of the community.

The family will receive condolences at Frenette Funeral and Cremation Centre, 88 Church Street, Moncton (858-1900) where the funeral service will be celebrated on Thursday January 26 at 4 pm. Visiting hours are Thursday from 2 pm until time of funeral. Interment will be in Our Lady of Calvary Cemetery in Dieppe. In memory of Ulysse, a contribution to N.B. Heart and Stroke Foundation would be appreciated.