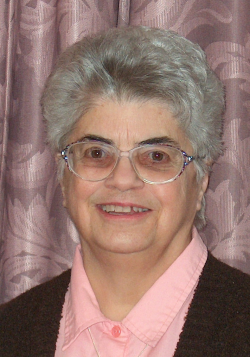 Sister Viviane Fraser, in religion Sister Francesca Marie, Fille de Jésus, of Riverview, passed away on Thursday January 19, 2023 at The Moncton Hospital. She was 90 years old, and in the 71st year of her religious profession. Born in Pointe-à-la-Croix, PQ, she was the daughter of the late William and Odile (Berthelot) Fraser. She was the 5th of 12 children.

She attended high school in Dalhousie where she made contact with the Filles de Jésus. In 1949, she entered the novitiate of the Filles de Jésus. Sister Viviane taught for 16 years, mostly in Nova Scotia. She then became involved in faith education for adults. She taught French and English to individuals.

She moved to Trois-Rivières, and after six years, she returned to Riverview where she lived in Parkland until now. Viviane has always been inspired by: "The Spirit of the Lord is upon me..." She gave attention to those in need. She leaves us with the memory of a simple, welcoming and prayerful woman. She leaves us in the blessed hope of the Resurrection.

Besides her Filles de Jésus Sisters, she is survived by three sisters: Isabelle, Edna fj, and Viola; her brother, John; as well as several nieces and nephews.

Besides her parents, she was predeceased by her her sister, Jeannine fj; and six brothers: Edwin, Frederick, Ralph, George, Hervé, and Garry.

The community will receive condolences at Frenette Funeral and Cremation Centre, 88 Church Street, Moncton (506-858-1900) where the funeral service will be celebrated on Thursday, January 26 at 10 am. Visiting hours are Thursday from 9 am until time of funeral. The funeral service will be streamed live; to view the funeral, go to Sister Viviane’s obituary on our Website. Interment will be at Our Lady of Calvary cemetery in Dieppe.

Words of comfort may be made at www.frenettefuneralhome