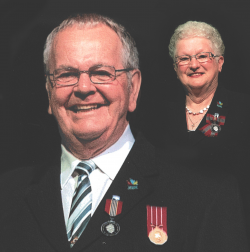 Jacques "Chuck" Jean Marie Lavoie, 88, of Moncton, passed away at The Moncton City Hospital on Friday January 06, 2023, after a long and courageous battle of ill health. Born in Campbellton, N.B., he was the son of the late Irenee "Rene" and Maria (nee Roy) Lavoie.

Chuck served in the Canadian Armed Forces for 21 years and was ranked as a Master Corporal in the Royal Canadian Air Force. He was in sales for the balance of his working years as a sales agent with his wife, Norma Jeanne Lavoie. They travelled for their own Sales Agency for over 40 years. He lived his life as a very kind gentleman and loving husband and great friend. He always had a huge smile.

Chuck was very involved in politics with his wife aIways by his side. They both served on the Board of Directors for a former local politician. They also were both on the Board of Directors for the SENB #60 Branch of the National Association of Federal Retirees. He was a member of the Royal Canadian Legion Branch #6 in Moncton as well as a member of the Dieppe Military Veterans Association. Chuck and his wife were recipients of the Governor General’s "Volunteerism" Award in 2017. He was a life long member of the Air Force Association of Canada.

To respect Jacques’ (Chuck’s) wishes, there will be no funeral or Celebration of Life. Cremation has taken place and a private burial will occur in the Spring. In memory of Chuck, contributions to the Heart and Stroke Foundation, Lung Association, Friends of the Moncton Hospital Foundation, CNIB, Albert House Hospice or a charity of the donor’s choice would be appreciated. Funeral arrangements are in the professional care of Frenette Funeral and Cremation Centre, Moncton (858-1900).