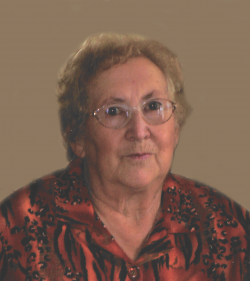 Gisèle LeBlanc, 89, of Haute-Aboujagane passed away peacefully on Friday, December 30, 2022, surrounded by her loving family at the Hospice SENB (Albert House) in Moncton. Born in Cap-Pelé, she was the daughter of the late Aurèle and Ella-Mai (Doiron) Vienneau.

She is survived by her two children: Guylaine Doiron (Michel) of Dieppe and Serge (Lise) of Haute-Aboujagane; six sisters: Léontine Vienneau, Rachel Vienneau (Ronnie-Gilles) both of Cap-Pelé, Germaine Cormier (Bertin), Loretta Bourque (late Arthur) both of Shediac, Louise Bourque (Joseph) of Grand-Barachois and Jacqueline LeBlanc (late Denis) of Dieppe; two grandchildren: Réjean and Vanessa, as well as many sisters-in-law, brothers-in-law, nieces and nephews.

Besides her parents, she was predeceased by her husband, Ronald (2013); one sister, Aurella and one brother, Oscar.

In memory of Gisèle, a contribution to the Hospice SENB (Albert House), Moncton would be appreciated by the family.