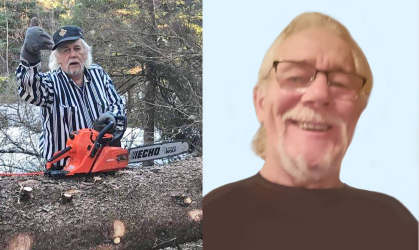 It is with great sadness that the family of Eric Thorrison Fenwick announces his passing, which occurred on Saturday, October 22, 2022 at his home. Born in Sussex, NB, he was the son of the late Oscar and Iva (Fougere) Fenwick.

Eric was a hard working man and willing to help anyone at any time of day or night. He loved his family, friends and the Lord God with all his heart. Most of his life was spent in Sussex and surrounding areas. He worked at many jobs throughout his life, but seemed to always return to working in the woods.

If you had the privilege of knowing Eric, you would never forget him. He had a wit and humour that left a long lasting effect on everyone he met along his life’s journey.

He will be deeply missed and never forgotten by all who knew and loved him.

Besides his parents, Eric was predeceased by one son, Joshua; and two sisters: Deborah Finley and Alegra Sharpe; as well as his sweetheart, Shirley Arsenault.

The funeral service will be celebrated at a later date. In memory of Eric, a contribution to a charity of the donor’s choice would be appreciated. Funeral arrangements are in the professional care of Frenette Funeral and Cremation Centre, Moncton (858-1900).