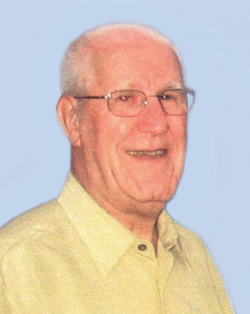 Francis "Frank" J. Auffrey, 94, of Moncton, passed away peacefully with his family at his side, at the Dr. Georges-L.-Dumont UHC on Monday September 26, 2022. Born in Amesbury, Massachusetts, he was the son of the late Zoël and Léola (Richard) Auffrey.

Frank spent his childhood in Pré-d’en-Haut and later on, in Scoudouc. Frank attended Collège Saint-Joseph in Memramcook before being employed by CN, where he became an electrical apprentice and later an electrical supervisor for the Diesel Shop at the Moncton Hump Yard. Upon retirement, his most enjoyable time was spending the summers at the family cottage in Scoudouc. He enjoyed the fall spending time at the hunting camp in Coles Island. A big sports fan, he enjoyed watching hockey and baseball.

He will be sadly missed by his wife of 75 years, Clémence (Belliveau); his son, Roland (Patsy) of Campbellton; three daughters: Francine Belliveau of Moncton, Janice Belliveau (Guy) of Dieppe, and Gisèle Dickson (Peter) of Moncton; five grandchildren: Danie, Cristine, Luc, Devin, and Dominique; four great-grandchildren: Zachery, Annabelle, Maxim, and Lauren; his sisters-in-law, Anita Auffrey (Georges), Marie Bourque (Yvon) and Jeannine Bourque (Ronald); as well as many nieces and nephews. He was the last surviving member of his immediate family.

Besides his parents, he was predeceased by his step-father, Edmond Melanson; his sister, Lillian Léger (Léandre); two brothers: Laurie and Georges; two half-brothers: Alban and Arsène Melanson.

A special thank you to the staff at the Manoir Notre-Dame and the nurses on 4A at the Dr. Georges-L.-Dumont UHC for their kindness and compassion during his time there, it was truly appreciated by the family.

There will be no visitation or funeral service. The family will hold a private graveside service at a later date in Saint-Jacques-le-Majeur cemetery in Scoudouc. In memory of Francis, a contribution to Maison Albert House Hospice would be appreciated. Funeral arrangements are in the professional care of Frenette Funeral and Cremation Centre, Moncton (858-1900).