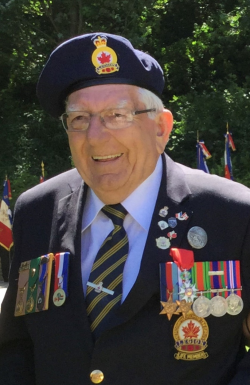 Frederick Bourgeois, 99, of Shediac, passed away with family by his side on Monday September 19, 2022, at the Veterans’ Health Centre, Moncton. Born in Shediac, he was the son of the late Gaspard and Herménie (LeBlanc) Bourgeois.

In 1941 Fred volunteered to join The North Shore New Brunswick Regiment at the young age of 17. After the Dieppe Raid in 1942, he was transferred to the Fusiliers Mont-Royal.  In his words, "We walked from Normandy to Germany. We were on foot. We walked 10 miles per day".  He served his country overseas from 1941 -1946. During the war he was on the battlefield, as a Stretcher Barrier, providing emergency medical treatment to the wounded soldiers trying his best to get them to safety.

In 2015, at 92 years of age, he was able to make the journey back to France to visit his fallen comrades and gain a little sense of peace. He was awarded the Légion d'Honneur during the Juno Beach Centre ceremony in 2015.

After the war he returned to Shediac where he met his wife Georgette and worked for CN rail for 41 years. You wouldn’t find Fred sitting down. He was a hard worker and skilled in the art of carpentry. He loved to plant flowers and grow a big Garden each year for his family.  His grandchildren have many fond memories of summers spent with him in Shediac and always enjoyed his fresh from the garden boiled dinners.

He was an active long-time member of the Shediac Legion and President of the Poppy campaign for many years. You may have spotted Fred at the Shediac co-op each November selling Poppies with his kind smile. He also enjoyed a morning Tim’s coffee and chat from time to time.

He was very content in his surroundings and always had a positive outlook on life which was contagious when you spent an afternoon with him. "Fred is a special person" people would often say.  He would often be telling you a joke or sharing one of his many stories. He will be so dearly missed by his family as they hold onto many cherished memories made over the years and life lessons he has taught them.  The family would like to thank the Veterans Health Centre for the kind and compassionate care and friendships they provided for Fred in his final years.

The family will receive condolences at Frenette Funeral and Cremation Centre, 396 Main Street, Shediac where the funeral service will be celebrated on Saturday October 1st at 11:00 am. His funeral will be live streamed on his obituary. Visiting hours are Saturday from 9:00 am to 10:45 am only. Interment will be in the St Joseph parish cemetery, Shediac.

In memory of Frederick, a contribution to a charity of the donor’s choice would be appreciated.