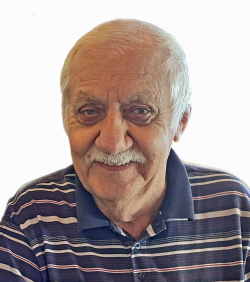 Fidèle Babineau, 82, of Moncton, passed away on Tuesday September 6, 2022 at the Dr. Georges-L.-Dumont UHC. Born in St-Louis, he was the son of the late Placide and Olézine (Guimond) Babineau.

Prior to his retirement in 1992, Fidèle was a mechanic with Lafarge Cement. He was a member of Notre-Dame-de-la-Paix Golden Age Club and Council 11985 with the Knights of Columbus.

Besides his parents, he was predeceased by one sister, Marie-Anne (Albert), and one brother, Roger (Marie); one half-sister, Anita; and two half-brothers: André and François.

The family will receive condolences at Frenette Funeral and Cremation Centre, 88 Church Street, Moncton (858-1900) where the funeral service will be celebrated on Saturday September 10 at 11 am. Visiting hours are Saturday from 10 am until time of funeral. The funeral service will be streamed live; to view the funeral, go to his obituary on our Website. Interment will be at Our Lady of Calvary cemetery, Dieppe. In memory of Fidèle, a contribution to the N.B. Heart and Stroke Foundation would be appreciated.