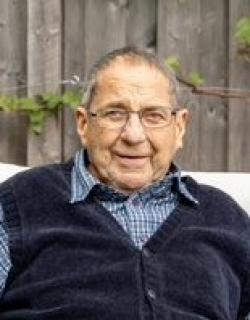 It is with great sadness that we announce the death of Arthur Bourque, 85, on Sunday September 4, 2022, surrounded by his family. He was the son of the late Maurice and Lucilda (Léger) Bourque.

Before his retirement and for many years, he was the owner of Arthur M. Bourque Floor Covering. Arthur had a passion for crafts, especially creating with wood bird feeders, cars, and all other small projects.

An extraordinary husband, a tender and devoted father to his children and a grandfather who loved to spoil his grandchildren. He will leave a huge void with the members of his family.

Other than his parents, he was predeceased by his brothers and sisters: Ronald (late Maimie), Roger (Noëlla), Alcide and Irois (Hélèna).

The family will receive condolences at Frenette Funeral and Cremation Centre, 396 Main Street, Shediac (532-3297) where the funeral service will be celebrated on Friday September 9 at 3 pm. The visiting hours are Thursday from 7 to 9pm and Friday from 2 to 2:45 pm. Face covering are recommended to enter the funeral centre. Interment will be in the St-Joseph cemetery, Shediac.

In memory of Arthur, a donation to the Tree of Hope or to the Vestiaire St-Joseph would be appreciated.

Words of comfort and donations may be made at www.frenettefunearlhome.com