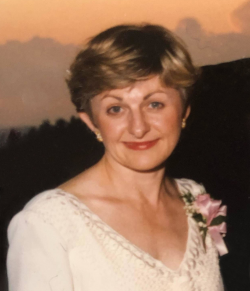 Donna Gail Matthews ("Gail"), 77, of Moncton, passed away peacefully on the morning of July 9, 2022 in Moncton, N.B.  Born in O’Leary, P.E.I., she was the daughter of the late Weldon and Alfreda (Wallace) Matthews.

She leaves behind her sister, Linda Wheeler; her four beloved nieces: Christa (Mark), Tracey (Kirk), Cindy (Andrew), and Susan; as well as 10 great nieces and nephews. She will also be greatly missed by many loving relatives and friends.

Besides here parents, she was predeceased by her brother-in-law, Gary Wheeler.

Gail spent most of her childhood in Nova Scotia where her love affair with the province and all its beauty began in earnest. She later moved to Riverview, N.B., with her family where she graduated from Moncton High School in 1963. She began her career in Halifax as an office manager with Parker Brothers Limited and later earned a Bachelor of Business Administration from Mount Saint Vincent University. In 1992, she was appointed as a full-time member of the Parole Board of Canada where she served two consecutive terms. After leaving the Parole Board, she applied her considerable administrative talents and passion for public service to managing the Gladstone Medical Centre, a role she held until her retirement. A proud Nova Scotian and passionate political organizer, she was a hard-working caucus member for both the Conservative Party and later the Liberal Party of Canada, always putting the person before politics.

Feisty and stubborn, loving and caring, second only to her family was her love of animals and nature often preferring the company of her four-legged friends over their human counterparts.

The family would like to express their sincere gratitude and thanks to all the staff at ProTem Memory Care for their exceptional love and compassion. They are an incredible team of caring individuals.

In accordance to her wishes, there will be no visitation and no funeral service. Interment will be in St. John’s cemetery in Halifax, N.S. Donations in her honour can be made to the Canadian Wildlife Federation https://www.cwf-fcf.org or Nova Scotia Nature Trust www.nsnt.ca. Funeral arrangements were entrusted to JA Snow Funeral Home in Halifax and Frenette Funeral and Cremation Centre in Moncton.