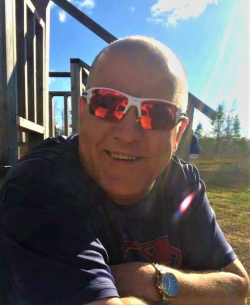 At the Dr-Georges-L-Dumont University Hospital, on Wednesday June 22, 2022, at the age of 54, Rodney Nima of St-André-LeBlanc passed away. He was the son of Lloyd and Rose-Mai (Bourque) Nima.

Rodney was a big-hearted man who loved helping people in addition to being very social. He liked to tease and play pool.

He is survived by his common-law partner, Mona LeBlanc; their three children: Vanessa Nima (Justin Cormier), Samantha Nima and Melissa Nima all of St-André-LeBlanc; his sister, Gisèle LeBlanc (Reg LeBlanc) and one brother, Wayne Nima (Nicole Bourque) all of St-André-LeBlanc, several nieces, nephews and his special dog, Toutit.

He was predeceased by his sister, Carmelle Nima.

The family will receive condolences at Frenette Funeral and Cremation Centre, 2642 Acadie Street, Cap-Pelé on Monday, June 27 from 9:30 a.m. until 10:20 a.m. departure time. The funeral will be celebrated at Ste-Thérèse-d'Avila Church, Cap-Pelé, at 10:30 a.m.

In memory of Rodney, a contribution to the New Brunswick Kidney Association would be appreciated.