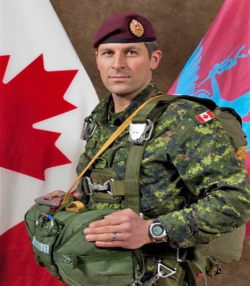 It is with great sadness that we announce the passing of Jason (Jay) Henry Joseph Penney, 45, on Friday June 17, 2022, due to complications following heart transplant surgery. Born in Cambridge ON, he was the son of Henry and Bernadette (St. John) Penney of Newfoundland.

Jason retired from the Canadian Armed Forces on February 16, 2019 at the rank of Captain, after a distinguished career of 21 years of service as a Combat Engineer.  He served with the 2 Combat Engineer Regiment, the 4th Canadian Division Support Base, 37 Canadian Brigade Group Headquarters and Canadian Forces School of Military Engineering.  As part of his many military achievements, he deployed on two international deployments: as a Combat Diver on TF Kosovo, in 1999 and as an Combat Engineer section 2IC on TF Kabul in 2005.  Amongst his many qualifications, Jason was very proud to be a Combat Diver Supervisor, Airborne Parachutist, Explosive and Demolition Specialist and LAV III Crew Commander.  He was an elite soldier and an excellent leader.

Following his career in the Canadian Armed Forces, Jason was hired as a surveillance officer for the National Aerial Surveillance Program (NASP) - Atlantic Region in February, 2019. Although Jason was hired as a Surveillance Officer he also held a private pilot’s license and loved to fly as part of the NASP crew. Each and every day that Jason participated in a flight he reminded his fellow crewmembers "life doesn’t get any better than this boys!" Jason loved life and lived it to the fullest.  He welcomed any and all challenges.  He was the most likeable and positive person you could ever meet: a steadfast friend to all.  He enjoyed riding his motorcycle with his friends and canoe camping with his family. Jason, thank you for your service to Canadians, you will be sadly missed and your memory cherished.

Besides his parents, Jason leaves behind his cherished wife of 14 years, Danie Bujold, and his two beautiful daughters, Éliane and Mia, at home; three sisters: Karen Penney (Jason Rodgers) of Kitchener, ON, Heather Penney of Cambridge, ON, and Bernadette Jr. Penney (Cody Gorman) of Woodstock, ON; one brother, Kyle (Jenna Messier) of Cambridge, ON; as well as many nieces, nephews, aunts, uncles, cousins and friends.

The family will receive condolences at Frenette Funeral and Cremation Centre, 88 Church Street, Moncton (858-1900) where the funeral service will be celebrated on Saturday June 25 at 10:30 am. Visiting hours are Friday June 24 from 6 to 8 pm only. Face covering is recommended. The funeral service will be streamed live; to view the funeral, go to his obituary on our Website. In memory of Jason, a contribution to the CHU Dumont Foundation or to the N.B. Heart and Stroke Foundation would be appreciated.