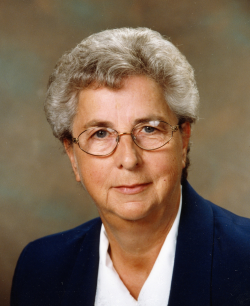 Sister Édith Léger (Aurèle-Marie), ndsc, passed away following a lengthy illness on Tuesday June 7, 2022, at the Motherhouse of the Religieuses de Notre-Dame-du-Sacré-Coeur in Moncton. She was 88 years old and in the 70th year of her religious life. Born in Notre-Dame, she was the daughter of the late Arthur and Edna (Richard) Léger.

Besides her religious family, she is survived by two sisters: Jeannette Daigle (late Lazare) and Lucille Cormier (late Paul) both of Moncton; one brother, Clarence (late Claudette) of Notre-Dame, as well as several nephews and nieces.

Besides her parents, she was predeceased by two brothers: Raymond (late Jeannine) and Paul (late Héléna).

Sister Édith will be resting at Frenette Funeral and Cremation Centre, 88 Church Street, Moncton (858-1900) on Thursday June 9 from 7 to 9 pm only. Face covering is strongly suggested to enter the funeral centre and will be required for the private funeral. A funeral mass by invitation will be celebrated in the chapel of the Motherhouse of the Religieuses de Notre-Dame-du-Sacré-Coeur in Moncton on Friday June 10 at 10 am. The funeral mass will be streamed live and may be viewed on her obituary at www.frenettefuneralhome.com where condolences may also be sent. Interment will be in Memramcook.