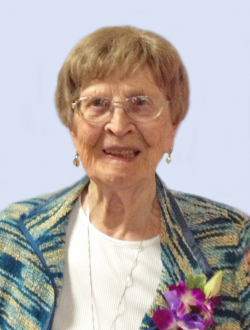 One of the eldest of the province has left us. Florine Després, 108 years and 7 months old, passed away on Friday June 3, 2022 at the Foyer Notre-Dame-du-Sacré-Cœur in Dieppe. Born in Cocagne in 1913, daughter of Joseph and Amanda (Sutton) Després, she was the last living person of a family of 13 children.

Besides her parents, she was predeceased by five sisters: infants Élise and Laura, Mélina, Laura and Hélène, as well as seven brothers: infants Zéphyrin and Yvon, Adélard, Armand, Lucien, Albert and Gérard.

She is survived by her nephews and nieces as well as many friends.

At the age of 17, she entered the convent where she took the name of Sister Marie Lucienne. As she was gifted in music, her community allowed her to continue her studies in this field. To do this, she attended Mount Allison University in Sackville, Laval University and the prestigious Vincent d'Indy School of Music in Outremont, Québec, among others.

Her profession led her to teach piano, first at the Notre-Dame-du-Sacré-Coeur convent in Saint Joseph, Memramcook, in Grand Falls and then at the Collège Notre-Dame-d’Acadie (N.D.A.) in Moncton.

In college, she, with another nun, founded the N.D.A. music school. She led the famous N.D.A. girls choir for many years. She led this choir to a very high degree of perfection, which earned her the Lincoln Trophy five times.

After N.D.A. College closed, Sister Lucienne left the community and became Florine Després again. She continued to work in the world of music at the École normale in Moncton and then in the Department of Music at the Université de Moncton.

After retiring from teaching in 1981, she remained active as an organist at Sainte-Bernadette and Notre-Dame-de-la-Paix churches in Moncton and continued to give private piano lessons.

May the Résidence Notre-Dame-du-Sacré-Cœur, then the Foyer N.D.S.C., be thanked for having made life pleasant for Florine and for the excellent care they gave her at the end of her life.

In 1981, the Université de Moncton awarded her an honorary doctorate and in 1984, Mount Allison University did the same. Other recognitions were also given to her.

Family and friends are invited at Frenette Funeral and Cremation Centre, 88 Church Street, Moncton (858-1900) where a celebration of life will take place on Thursday June 9 at 4 pm. Visiting hours are Thursday from 2 pm until time of funeral. Interment will be at Our Lady of Calvary cemetery in Dieppe.

In memory of Florine, a contribution to the Fonds de bourse Neil-Michaud (for music at the Université de Moncton) are welcomed.