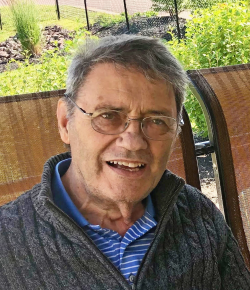 Francis Léger, 80, of Moncton, passed away on Monday January 3 2022 at the Faubourg du Mascaret. Born in Moncton, he was the son of the late Alphonse and Lorette (Arsenault) Léger.

Francis spent the better part of his life working within a variety of financial institutions in New Brunswick and Newfoundland.  He was very proud of his sons and grandchildren, spending considerable time cheering them on and being their number one fan in various sports.  Francis gave back to the community by way of volunteering for organizations such as «La Société des Jeux d’Acadie» and «Les Jeunes Entreprises» in Bathurst.  He will be dearly missed.

He is survived by his three children: Jeff (Stephane) of Toronto, ON, Denis (Michèle O’Connell) of Edmundston, and Paul (Aislynn Slupsky) of Moncton; eight grandchildren: Ben, Madeleine, Chloé, Sarah, Rebecca, Hannah, Kalina, and Kole; two sisters: Loretta Poirier (Robert), and Muriel Levy (Don), both of Shediac; as well as his nieces and nephews.

Besides his parents, Francis was predeceased by one sister, Cécile Langis (Val); and one brother, Paul.

The family will receive condolences at Frenette Funeral and Cremation Centre, 88 Church Street, Moncton (858-1900) from where the funeral service will be celebrated on Saturday January 8 at 11 am. Visiting hours are Saturday from 9:30 am until time of funeral.  Face covering is mandatory, and proof of vaccination and government issued identification card are required to enter the funeral centre; and social distancing is in effect. Interment will be at Saint-Jacques-le-Majeur cemetery, Scoudouc.

In memory of Francis, a contribution to CHU Dumont Foundation or the Fondation des Jeux de l’Acadie would be appreciated.