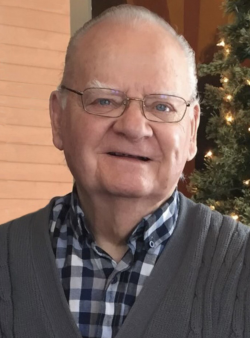 Roy Ward, 82, formerly of Ottawa, Ontario, passed away on Saturday December 18, 2021 at the Foyer Saint-Thomas in Memramcook. Born in Fort-Coulonge, QC, he was the son of the late James Ward and Béatrice Dempsey.

Prior to his retirement, Roy was a branch manager for Scotia Bank and a real estate agent.

He was happiest when he was with his seven grandchildren: Cedrick, Candy, Alexandre, Maxime, Livia-Rose, Zachary, and Alexanne. Also three great-grandchildren: Amélia, Eliana, and Léo; one sister, Jean Morin (Bernard) of Rockland, ON; one brother, Earl (Georgette) of Manotick, ON; as well as many nieces and nephews.

He was predeceased by two sisters: Marvel and Eilleen; and two brothers: Dylan, and infant Donald.

The funeral service will be celebrated at a later date. In memory of Roy, a contribution to the Alzheimer Society would be appreciated. Interment will be in Sainte-Kateri cemetery in Fort-Coulonge, QC. Funeral arrangements are in the professional care of Frenette Funeral and Cremation Centre, Moncton (858-1900).