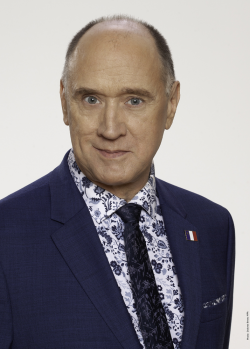 It is with deep sorrow that we announce the passing of Robert W. Melanson, 61, of Moncton, on Wednesday November 3, 2021 at the Albert House. He was surrounded by his loved ones.

He was the son of the late Wilfred A. Melanson and the late Géraldine (Dugas) Melanson of Rogersville. He is survived by his brother, Valbert (Madeleine LeBlanc); his sisters: Valéda (Ali Osmani), Mona (Bernard Vézina), Claire (Ken Rehberg) and Berthe (Charles Doucet), as well as 10 nephews and nieces, and many very good friends.

Over the past year, Robert has shown extraordinary resilience. Until the end, he enjoyed life and keep many laughing.

An ardent defender of the French language in New Brunswick, he did not hesitate to put his love of the language to the forefront. His nomination as president of the Société de l'Acadie du Nouveau-Brunswick (SANB) and his numerous appearances in the media were telling demonstrations. He worked for 25 years to promote French literature and writers at the helm of the bookstore "La Grande Ourse" in Moncton, which is now located in Dieppe. He also implemented many literary events, including Le Salon du livre de Dieppe.

Robert was a multitalented man who excelled in several areas. He had a vast culture, nourished by boundless curiosity. Many will recall traveling with him to "his" Maritimes which he adored, and in doing so, taking a history course worthy of the highest university graduates.

Robert was a lover of art and a man of theater. He studied at the National Theater School in Montreal. He appeared in many films and had a great presence on stage. He was born a public speaker. Gifted with a great sense of humour and a remarkable intelligence, he knew how to dazzle his audience. He also had a remarkable talent for making costumes and disguises worthy of the great museums.

Robert was an epicurean who dabbled in life. He knew how to appreciate great music and good food, had a deep sense of enchantment and loved the beauty of things.

Robert was also very generous person who was very attentive to his friends. He was an amazing being like we don't often meet in a lifetime. Numerous are those who will remember him and his time on earth.

Robert would have wished to be remembered as a joyful person, a man of celebration, but who knew how to ask the real questions and who had an opinion on everything.

Robert will be missed, but we will never forget him.

We would like to thank his oncologist Dr St-Hilaire, with whom Robert had a genuine connection, helping to make this year easier to bear. During their many meetings, it was as often a question of literature as of illness. In addition, we will always be grateful for the great care and assistance of the Maison Albert team.

The family will receive condolences at Frenette Funeral and Cremation Centre, 88 Church Street, Moncton (858-1900) where a celebration of life will take place on Saturday November 20. Visiting hours are Saturday from 2 pm until the time of sharing of memories at 4 pm. Face covering is mandatory, and proof of vaccination and government issued identification card are required to enter the funeral centre. The sharing of memories will be streamed live; go to his obituary at www.frenettefuneralhome.com. Interment will be in Rogersville parish cemetery. In memory of Robert, a contribution to the Albert House (www.hospicesenb.ca) would be appreciated.