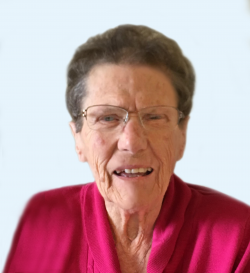 It is with great sadness that we announce the passing of our Mom, Thérèse Cassidy, 94, on Wednesday October 27, 2021 at the Villa du Repos, formerly of Moncton and L’Auberge du Soleil in Dieppe. Born in Dover, she was the daughter of the late Henri and Anna (Bourque) Gauvin.

Thérèse worked at Eaton’s and The Bay restaurant (Codiac Caboose). She also volunteered at Dr. Georges-L.-Dumont Hospital. Some of her passions were playing 200, knitting and making quilts but none greater than time spent with her children, grandchildren and great-grandchildren who were her pride and joy.

The family wishes to extend their sincere gratitude to the staff of the Villa du Repos for their exceptional care provided to Thérèse during her stay.

The family will receive condolences at Frenette Funeral and Cremation Centre, 88 Church Street, Moncton (858-1900) on Wednesday from 2 to 4 and 7 to 9 pm only. The funeral mass will be celebrated at Our Lady of Assumption Cathedral, 220 St. George Street, Moncton on Thursday November 4 at 10:30 am. Face covering is mandatory, and proof of vaccination and government issued identification card are required to enter the funeral centre and at funeral mass. Interment will be in Our Lady of Calvary cemetery, Dieppe. In memory of Thérèse, a contribution to the Alzheimer Society or a charity of the donor’s choice would be appreciated.

Words of comfort and donations can be made at www.frenettefuneralhome.com