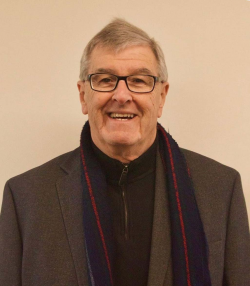 On October 10th 2021, peacefully surrounded by his close family, Adair Roland Losier, 68, passed away at The Moncton Hospital.

Born in Tracadie NB, he was predeceased by his father Raoul Losier and survived by his mother Jeanne (Bourgeois).

He will be missed by his wife of over 36 years Rhonda (Connors) Losier, his brothers Raymond (Gertrude McLaughlin), Tracadie NB and Bruno (Rhonda Moules) Ancaster, ON, his two beloved daughters, Rachel Comeau (Denis) and Kaylee Losier (Marc Johnson) of Moncton NB, his only niece Michelle Brideau (Marc Robichaud) and her son Felix. He was profoundly proud of his three beautiful grandchildren, who gave him the courage to fight, Olivier, Xavier and Daphnée Comeau of Moncton NB and by his brothers-in-law, Brent Connors of Miramichi, NB and Kirk Connors of Upper Blackville, NB.

With over 25 years of contribution in baseball, at a young age of 14, he could hit a ball out of the park with ease which got him invited on the Intermediate and Senior ‘’les Aigles’’ team of Tracadie, NB, that made it to the provincial championships in both 1973 and 1974. Following his many years in Baseball, Adair continued to give back to sports, by coaching introduction to hockey, mini handball with his daughter in 2003, as well as holding the position as President of Handball NB for many years. He was also a parent-volunteer with the NB Juvenile Handball team from 2004-2009. His devotion to see children play sports, continues to resonate within our province. He always believed that sports would provide any individual with the aptitudes to succeed in life.

Known as Mr. Christie, his 40 year sales career also included Nabisco, Kraft Foods, Cadbury and ended with Mondelez International. He would pride himself of a job well done and always ready to go above and beyond for his clients.  In his spare time, he would continue to give back to his community, through politics, the Club d’Age d’Or NDG, MS Society, Cancer Society, Diabetes Society as well as an active member of the Poppy campaign with the Moncton Legion for the last nine years. In 2019, he was the recipient of the Richard.B.Hatfield Award. As an organ donor, Adair truly believed everyone had the power to make this world a better place, one action at a time.

Although there are too many to be named, the family thanks his medical team for the ongoing support and continuous efforts in prolonging his life. This includes but is not limited to the Oncology department nurses, Dr Harb, Dr Ojah, Dr Shakerinia and Dr O’Brien at The Moncton Hospital.

The family will receive condolences at Frenette Funeral and Cremation Centre, 88 Church Street, Moncton (858-1900) on Thursday May 12 from 2-4 and 7-9 pm and Friday May 13 from 9:30 am until time of departure (10:45). The funeral mass will be celebrated at Notre-Dame-de-Grâce Roman Catholic Church, 858 Mountain Road, Moncton on Friday May 13 at 11 am. Face coverings are recommended. Interment will be in Frenette Columbarium, Moncton.

Donations can made to The Moncton Hospital Oncology department or to the Atlantic Cancer Research Institute in his memory.