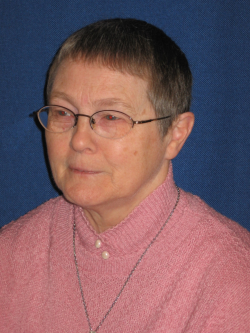 Sister Marion Briand, in religion Marie Angélique, passed away on Thursday October 7, 2021 at Monarch Hall, Riverview, at the age of 82, and in her 57th year of religious profession. She was born in West Arichat, N.S., the daughter of the late William and Hélène (Wagner) Briand.

Besides her religious family she is survived by one brother, Robert from Dieppe, N.-B.  She was predeceased by her parents and her two brothers, René and Cecil.

Sister Marion devoted her life to serving the community in the kitchen and various other services at the Provincial House.  She also served in the following communities: Chéticamp, Dundee, Rogersville, L’Ardoise and Saulnierville.  During 14 years, she worked as a housekeeper for the retired priests in Sydney, N.S.  In 2010, Marion moved to Royal Court in Riverview where she was very much appreciated by the residents.  In 2016 she moved to Canterbury Hall and one year later to Monarch Hall where she received the care she needed.

Cremation has taken place.  The community will receive condolences at Frenette Funeral and Cremation center, 88 Church Street, Moncton (506) 858-1900 on Wednesday, October 13th from 9 to 10 pm only.  A celebration of Marion’s life will follow at 10 am.  The funeral service will be streamed live; to view the funeral, go to her obituary on our Website.  Due to the new regulations face covering is mandatory, and proof of vaccination and government issued identification card will be required to enter the Funeral Centre.

Interment will be in Our Lady of Calvary cemetery, Dieppe.

Words of comfort may be made at www.frenettefuneralhome.com