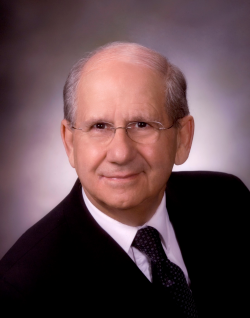 It is with great sadness that we announce the passing of the honourable Alfred R. Landry, 85, of Shediac, on Wednesday October 6, 2021, at the Moncton Hospital. Born in Robichaud, he was the son of the late Albert and Agnès (Thibodeau) Landry.

Judge Landry is a lawyer and a retired Justice of the Court of Queen’s Bench of New Brunswick.

He was born in Robichaud, N.B., in 1936 and graduated from Barachois High School.  He studied at Assumption College in Moncton and received his B.A. degree, summa cum laude, from St. Joseph University in 1957.  He graduated from the University of Ottawa with a B. Comm. degree in 1958 and studied for two years at the U.N.B. Law School.  In 1960 he was awarded a Rhodes Scholarship and then studied law at the University of Oxford, England for three years, completed a B.A. Jurispr in 1962 and was admitted to the degree of M.A. in 1966. Judge Landry was called to the Bar in 1964.  He was senior partner of the law firm Landry & McIntyre and had practiced law for 21 years when he was appointed to the Bench in 1985. He became a supernumerary judge in 2001 and retired from the bench in 2011. On the unanimous recommendation of the New Brunswick Legislative Assembly Judge Landry was appointed Conflict of Interest Commissioner and served as such for two years between September 2013 and July 2015.

He received Honorary Doctorates from St. Thomas University (1973) and from Université de Moncton (1977) and was appointed Queen’s Counsel in 1978.

In the past, Mr. Landry has been a director of Atlantic Region Canadian Council of Christians and Jews, a director of the New Brunswick Heart Foundation and Atlantic Co-Chairman of the Université de Moncton Fund Raising Campaign.  He has been a member of the Moncton Rotary Club, the N.B. Barristers’ Society, the Moncton Barristers’ Society, the Association of Insurance Attorneys, the Canadian Judges Conference, the N.B. Rhodes Scholarship Selection Committee, the Moncton Board of Trade and the Shediac Chamber of Commerce.

He has served as Secretary of the Shediac Lions Club and was P.C. candidate for the provincial riding of Shediac in 1982.

He was predeceased by five siblings: Thérèse Landry, Clorice, Antoine, Gérald and Raymond.

The family will receive condolences at Frenette Funeral and Cremation Centre, 396 Main Street, Shediac, on Monday October 11, 2021, from 1 to 4 pm only. Due to the new regulations, face covering is mandatory, and proof of vaccination and government issued identification card will be required to enter the funeral center. A private service will be held. Interment will be in the St-Joseph cemetery in Shediac.

In memory of Alfred, a contribution to the Fondation Dumont Foundation or to the Friends of the Moncton Hospital would be appreciated.