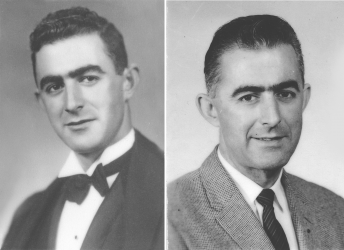 Dr. Edgar Joseph Doiron, 89, of Moncton, passed away on Sunday September 26, 2021 at The Moncton Hospital. Born in Rustico, PEI, he was the son of the late Stanislaus and Matilda (Pineau) Doiron.

He is survived by his wife for 63 years, Patricia (nee Robichaud); as well as numerous nieces and nephews. He was the last surviving member of his immediate family.

Besides his parents, he was predeceased by four sisters: Delma, Louise, Stella, and Marita; and two brothers: Aubin "Joe" and Vince.

Dr. Doiron did his early schooling in Rustico, PEI, and received his BA from the Université de Sherbrooke in 1955 and completed his dental degree in Montreal in 1959. He joined the military and practised dentistry at Camp Petawawa until 1964 when he opened his practice in Moncton. In his third year of dental studies, he married Patricia, the love of his life, on September 1, 1958. He ran his practice in Moncton for 30 years until his retirement in 1994.

In accordance with his wishes, there will be no visitation. The funeral mass will be celebrated at St. Bernard R.C. Church, 43 Botsford Street, Moncton on Friday October 1, 2021 at 11:30 am. Interment will be in Frenette Columbarium, Moncton. In memory of Edgar, a contribution to the Living Clinic of The Moncton Hospital would be greatly appreciated. Funeral arrangements are in the professional care of Frenette Funeral and Cremation Centre, Moncton (858-1900).