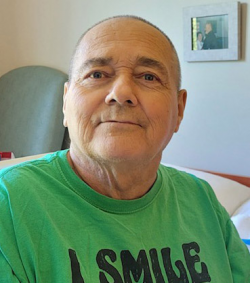 Robert Gallant, 68, of Moncton, passed away on Thursday September16, 2021 at Landry Pavilion of the Faubourg du Mascaret. Born in Moncton, he was the son of the late Laurie and Della (Melanson) Gallant.

Prior to his retirement, Robert was a machine operator for the City of Moncton.

He was predeceased by his wife, Barbara; one sister, Edith Trites (Eldon); and two brothers: Alfred and Andy.

The family will receive condolences at Frenette Funeral and Cremation Centre, 88 Church Street, Moncton (858-1900) where the funeral service will be celebrated on Saturday September 18 at 11:30 am. Visiting hours are Saturday from 10:30 am until time of service. Face coverings are recommended and social distancing is in effect. Interment will be at Our Lady of Calvary cemetery in Dieppe. In memory of Robert, a contribution to Canadian Diabetes would be appreciated.

Words of comfort and donations can be sent at www.frenettefuneralhome.com.