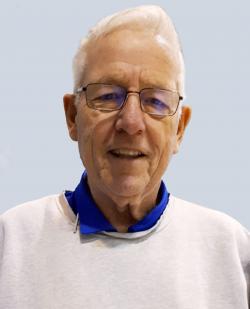 The final buzzer has sounded on a life of 76 years that was packed full of family sports, travel and love.  David « Nick » LeBlanc left us on Friday, January 8th, 2021.

Regularly described as a «tough guy », whether referring to his East End upbringing or his resiliency, Nick redefined the word « tough » over the past 5 years, even more so during the last 2 months.  The folklore of Nick will live on forever thanks to the unbelievable stories he shared and the many sayings, or « Nickisms », he passed down to his family and friends.

He was proud of every city he ever lived in, Edmundston, Charlottetown and Ottawa among them.  As a teenager, he would ride the train to Ottawa and spend the summer with relatives, having even worked as a ball boy for the Rough Riders.  Nick was however proudest of his birthplace, Braeside ON, and his beloved East End of Moncton.

A proud HTHS Trojan and a graduate of the School of Hard Knocks, Nick wore the uniforms of the CN Police, Ontario Provincial Police, Ottawa Police Force and Moncton Police Force.  He transitioned to arson investigations before ending his career as a private investigator.

Once his own hockey and football careers came to an end, Nick threw himself into volunteering, as a trainer, driver, organizer and most importantly, as a coach and mentor to many.  A 2-time inductee to the Moncton Sports Wall of Fame (1979 Hardy Cup Champions, Moncton Hawks and 1991 Canadian Junior Women’s Curling Champions, Smith rink), Nick was particularly proud of having coached his two daughters to a combined 7 provincial curling titles.  Curling permitted him to travel across Canada and to make many friends along the way.

Curling replaced football and hockey remained his passion until his final days.  It’s safe to say Nick felt quite comfortable working the Wildcats penalty box for many years, almost like a homecoming for him, so to speak.

Nothing made Nick brag and beam with pride more than his two grandsons.  He attended each school event and every single hockey or basketball game they played.  He thought they were perfect!

Nick would always, without exception, « tell it like it is » and you always knew where you stood with him.

What ties his youth, his career and his use of his spare time together are simply his « gift to gab », his desire to know everything and his love of working with and for others.  He was devoted to those he loved right to the end.

The care offered by the staff of 3600 (Moncton Hospital) was second to none.  Thank you to each nurse and to the palliative care doctors.  Thank you as well to the staff of the Dr. Rubin Oncology Center, especially Dr. Harb and pharmacist Glenn Myers, two of Nick’s biggest cheerleaders.

Since Nick merits a celebration of his life much larger than Covid restrictions permit, a private funeral service will be held at Frenette Funeral and Cremation Centre, Moncton and a future event will be announced and held at a later date. The funeral will be videotaped and posted later in the afternoon on Tuesday on his obituary at www.frenettefuneralhome.com. Donations to the Friends of the Moncton Hospital are welcomed.  Messages of condolence and the sharing of your favorite « Nick Story » can be made on our website and would be greatly appreciated by the family.